In this last era, people have been caught up in the advances of a materialistic age which enhances their cravings for luxury goods, expensive foods, designer clothing, and the finest homes and vehicles they can attain. Such secular attractions spur vicious competition between human beings and among societies, with little thought of the future of the world or eternity for themselves; the only thing that seems to matter in life is that the strong prevail as the meek succumb to their interests. The powerful rich mercilessly oppress the poor and vulnerable in an age-old legacy of indulgence against all that is holy. Alas, history's wave of civilization has not promoted the good, rather shattering moral traditions and belief; life is used only to advance the profane--death having no meaning except a lost opportunity to build wealth, giving no thought to a hereafter of Nirvana or Hades. The educated elite develop killing arms and lifesaving drugs that are only available to the rich; charity and service to humanity are paid little heed. Even loyalty to spouse and family have decayed through the excesses of materialism.

And so, out of Heaven was the Tao founded as an offer of redemption for human beings, reiterating eternal sanctity and morality for the modern age. Because of love for all Creation, The Supreme Being reveals the Tao through miraculous spiritism, using simple Vietnamese language. The disciples who were initiated since the time when spiritism ceased, could not have the pleasure of hearing these precious messages emanating from the Merciful Supreme Being.

Thus the Sacerdotal Council has selected and published these holy teachings for everyone. Its belief is that whoever receives these holy teachings would be filled with grace. Its hope is that all may cherish these invaluable words from Superior Spirits, putting their hearts into the reading of them in order to understand the miraculous Tao and to commit to self-cultivation and selfless love of the human family.

May whoever receives these holy words experience the divine light illuminating the path of their life.

Tayninh Holy See, the 21st day of the 10th month of the year Đinh Mão.

to the translation of Thanh Ngon Hiep Tuyen

I am honored to have been asked to introduce readers to this translation of the spirit messages that make up the sacred scriptures of Caodaism, a new religion which is officially called the Great Way of the Third Age of Universal Redemption.  After having studied Caodaism for over a decade, I can testify to the fact that is a fascinating new religion, born in colonial Indochina in 1926, which is now gathering increasing attention all over the world.  These teachings were conveyed in an unusual way:  Rather than being transmitted to any single individual, they were presented through a sort of dictation at spirit medium séances, through the use of a device called the phoenix basket  (known in French as the corbeille a bec) and the efforts of two mediums.  The movements of the phoenix basket trace out words and sentences, and this form of “spirit writing” is then interpreted and transcribed, so that it can serve to instruct others.  The messages come from a range of divine beings, from the Jade Emperor (also known as Cao Dai, “the highest power”) to the Invisible Pope (Ly Thai Bach, a famous Taoist poet from the Tang dynasty), to various other spirits, including the Sacred Mother of Humanity (Dieu Tri Kim Mau, also known as the Taoist Queen of the Heavens)

The corpus of spirit messages included in this collection are the officially selected messages which have been central to the formation of Caodaism.  They are presented in verse, as well as prose, and the elaborate Sino-Vietnamese language used in them is sometimes challenging for even native speakers to understand.  For this reason, it is especially valuable to have these translations, prepared so that a new generation can read the teachings and understand them even if they are not fluent in Vietnamese.  The translators have worked for many decades to develop and refine these translations, and their efforts will allow scholars and members of the public to get a much better understanding of the content of Caodai scriptures.

There have now been a number of studies which have tried to explain the history, theology and rituals of Caodaism to a wider audience, but of course the most direct way to learn about Caodai beliefs is to read these teachings yourself.

Professor of Anthropology and Religion

Foreword of the translators

The diversity of religions brings about an array of uncertainties and mistrust between people of different traditions. CaoDai propounds the goal to unite religions in harmony and peace and to solve human conflicts. It conceives that all humans are brothers and sisters from the same Father God. Each and every member of the human race has God’s spirit inside, and with cultivation, this spirit will be reunited with its noble origin.

Via spiritism, CaoDai receives words from the Supreme Being under the form of poems and prose teaching humanity ways of life to reach peace within and without.

We translate these teachings into English in the hope that many may be blessed with wonderful miraculous words from the Merciful Supreme Being. 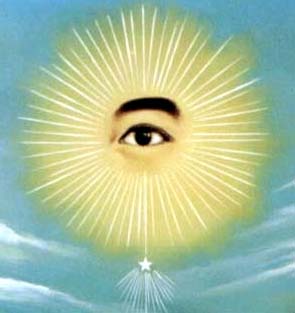 The Eye represents the heart,

Light and Spirit are One

God is the Spirit’s gleam

The noble effort of CaoDai is to unite all of humanity through a common vision of the Supreme Being, whatever our minor differences, in order to promote peace and understanding throughout the world. CaoDai does not seek to create a gray world, where all religions are exactly the same, only to create a more tolerant world, where all can see each other as sisters and brothers from a common divine source reaching out to a common divine destiny realizing peace within and without.

OK
We use cookies to help us understand ease of use and relevance of content. This ensures that we can give you the best experience on our website. If you continue, we'll assume that you are happy to receive cookies for this purpose.